Mark the return of Spring by listening out for the cuckoo!

Help record what is for many the distinctive sound of Spring – the call of the cuckoo.

If you see or hear a cuckoo please submit your record below. 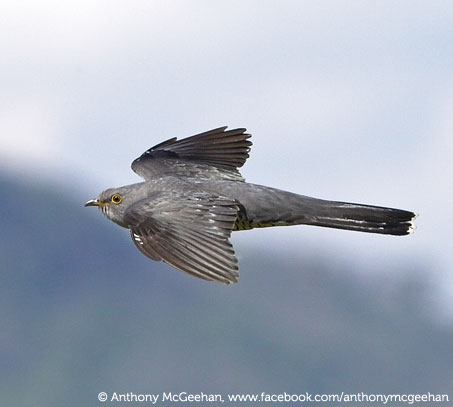 Call: Cuc-oo (males). Bubbling call (females). Call throughout spring. To hear it, visit the RSPB website. This bird is much more likely to be heard than seen.

Timing: Arrive from Africa in April and May.

Strategy: Don't build nests, but use those of other birds e.g. dunnocks, meadow pipits etc. In host bird's nest, female cuckoo removes one egg and lays one of her own. Host bird brings up large cuckoo chick which pushes the remaining eggs or chicks out of the nest.

Threats: Land use changes leading to loss of preferred habitats such as wetlands and marginal land.

Important: if you use this site regularly, please remember to login.